In this special Rumble-exclusive interview, Sebastian spends a whole hour with the one and only Steve Bannon, host of “War Room: Pandemic” and former White House Chief Strategist, to talk about a wide array of issues. After talking about his own backstory and the storied history of his working-class family, Steve discusses the many ways that the political elite has abused the working class and alienated the American people, which makes populism like that represented by Donald Trump necessary. They also address the widespread voter fraud that took place in the 2020 election, which most likely swung the results away from President Trump and in favor of Joe Biden, and what can be done to stop such a steal from happening again. Steve also gives his opinion on the biggest question in politics for the foreseeable future: Will President Trump run again in 2024? 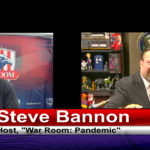