For the opening monologue, Sebastian reacts to the latest absurd statement from the man who bears the title of “President of the United States,” Joe Biden, who claimed at the United Nations that the government will get the crisis at the border “under control” soon. Sebastian contrasts this claim with the footage from recent days that shows the surge getting worse than ever before, with over 10,000 illegal aliens camped out in third-world conditions under the Del Rio International Bridge in Texas. As illegals pour in from countries all over the world, including Haiti and Angola, the public safety and health threats to our country are greater than ever before, as a direct result of Biden’s open-border approach that drew these illegals in the first place. The ongoing suffering of both American citizens and the migrants themselves, Sebastian points out, is to be blamed squarely on those who voted for Joe Biden in 2020. 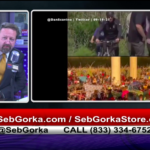 America First Highlight: This tragedy is on every Biden voter.