For the first segment of the third hour, Sebastian talks to Shawntel Cooper, the Loudoun County parent whose speech railing against Critical Race Theory in front of the Loudoun County School Board went viral recently. Ms. Cooper recalls what she said in her speech about how Critical Race Theory, the far-left conspiracy theory claiming that America is a racist nation and that all white people are racist, fundamentally violates Dr. Martin Luther King Jr.’s calls for all of us to not judge each other by the color of our skin. She also explains what she and other parents in the area are doing to raise further awareness to this dangerous ideology, and fight back against it. 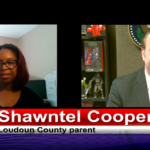