For this three-segment interview, Sebastian is joined in-studio by rising GOP star and Congressional nominee Kimberly Klacik, who is running in Maryland’s 7th congressional district, which includes the violence- and crime-ridden city of Baltimore. Kim talks about her campaign ad displaying the most run-down portions of the once-great city and how they are the result of over 50 years of Democratic rule, an ad which has since gone viral. Kim explains how this is indicative of the Democratic Party’s mistreatment of black Americans, and why black Americans do not owe the party their votes. 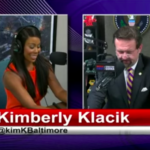