For the opening of the show, Sebastian talks to America’s Mayor, Rudy Giuliani, about the unprecedented assault on his Constitutional rights by the Biden Administration. Rudy describes the raid that took place at his apartment and offices at 6 AM on April 28th, including the surprising fact that the agents who took his electronics were actually polite in dealing with him. Rudy then talks about the shocking fact that, when he pointed out which hard drives originally belonged to Hunter Biden, the agents refused to confiscate those, which tells everything you need to know about why this raid happened in the first place. 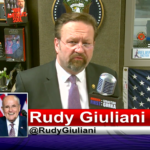