For the opening of the second hour, Sebastian talks to former NYPD Commissioner Bernie Kerik about multiple major topics. After discussing his new book “The Lost Son,” which details his life and career fighting for justice, Sebastian and Bernie talk about the ever-rising anti-police sentiments being stoked by the far-left, and how they are destroying the profession of law enforcement in America today. They also discuss the blatantly partisan federal raid on Rudy Giuliani, with Bernie commenting that although the raid was clearly an intimidation tactic, the Deep State will not be able to defeat Rudy Giuliani that easily. 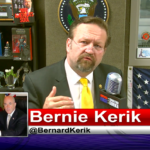