Sebastian opens the third and final hour with Georgia Congresswoman Marjorie Taylor Greene, who talks about her latest efforts to introduce America First legislation into Congress, including measures to defund sanctuary cities and secure the border. Congresswoman Greene then talks about the Democrats’ efforts to silence her by introducing a resolution to formally expel her from Congress. Although the measure requires a two-thirds’ majority in order to pass, the move nevertheless represents an extremely brazen, anti-Constitutional, and fascist attempt to shut her down for the crime of being pro-Trump and supporting the MAGA agenda. 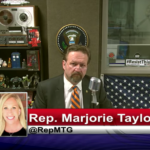 America First Highlight: The woman the Democrats want to destroy.