For the second hour’s monologue, Sebastian reflects on the true meaning of the word “war,” a word that has become overplayed in the modern American political lexicon. Although other so-called “wars” such as the “war on crime” or “war on poverty” are failures and don’t come close to capturing the true meaning of the word, there is indeed one homefront war that does: The war on our police. Sebastian takes time to remind the listeners that the top martyr of Black Lives Matter, George Floyd, was a career criminal with multiple crimes to his name, including pointing a loaded gun into the belly of a pregnant woman, and should not be memorialized. He then contrasts this lionization of a scoundrel with the media silence on the deaths of dozens of law enforcement officers who have been killed in the line of duty since Floyd’s death. Sebastian reads every single name, ranging from police departments to federal agencies, and wonders if this death toll would be enough to satisfy the far-left “defund the police” crowd. 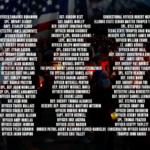