In the show’s opening monologue, Sebastian reacts to MSNBC’s Chris Hayes hysterically claiming that President Trump’s efforts to fight voter fraud are somehow akin to a North Korea-style dictatorship. After pointing out how the Left more closely resembles a dictatorship than anything else, Sebastian explains how the Democrats’ rabid push for mail-in voting, ballot-harvesting, and other illegal election practices that are ripe for fraud, is a true existential threat to America’s republican form of government. 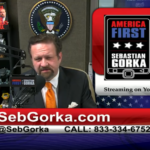