Sebastian turns the tables in this special interview with Fox Business host Lou Dobbs; in Lou’s first-ever appearance on AMERICA First after numerous appearances by Sebastian on Lou’s show, now Lou is in the guest seat. Sebastian and Lou discuss President Trump’s four executive orders on Coronavirus relief, from cutting the payroll tax to an extended forgiveness of student loan debt, and from a federal eviction moratorium to an extension of unemployment benefits at a reduced weekly rate. Then Lou talks about his upcoming book “The Trump Century,” explaining how President Trump could easily become the most significant political figure of the 21st century, with an influence that will be felt decades after he leaves office. 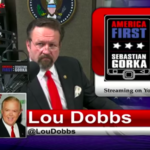