For the final interview of today’s show, Sebastian is joined in-studio by Amanda Milius – daughter of the legendary filmmaker Amanda Milius and a director herself – to talk about her new documentary, “The Plot Against the President.” An adaptation of Lee Smith’s book of the same name, the film is by far the most comprehensive look yet at the “Russian collusion” hoax created by the Deep State – from Robert Mueller to Rod Rosenstein, among many, many other bad actors – and how important a small handful of heroes truly were in uncovering the scandal, including Congressman Devin Nunes. 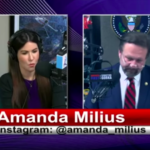 America First Highlight: The Plot Against the President