Tennessee Senator Marsha Blackburn returns to AMERICA First to discuss President Trump’s new executive order officially banning TikTok and another Chinese app, WeChat, from being used in the United States. After explaining how this was the right move from a national security perspective, Senator Blackburn discusses her latest efforts in the Senate to raise awareness to China’s dealings with other American entities, including the NBA. 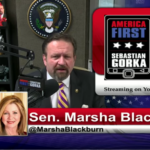