For the entirety of the second hour, Sebastian is joined in-studio by Congresswoman Marjorie Taylor Greene of Georgia’s 14th Congressional District. Congresswoman Greene, who has been censored by Big Tech, forced off of her committees by Speaker Nancy Pelosi, and has even had Democrats try to expel her from Congress, talks about the many radical proposals that the Democrats have tried shoving through since Joe Biden took office, from gun control to Big Tech censorship. She and Sebastian also discuss the reasons why she in particular is so viciously hated and targeted by the Democrats, including her outspoken and politically incorrect speech and her undying support for President Trump and the America First agenda. 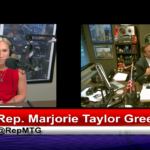 America First Highlight: The most hated woman in Washington