Sebastian opens the show by discussing the extremely far-left bill known as the “Equality Act,” which has just been passed by the House of Representatives. The bill is a Democrat-backed effort to legally redefine the very concept of gender in the United States, for the purpose of giving special privileges to “transgender” people. The bill would eliminate legal barriers between the two genders, permitting men to use women’s facilities and compete in women’s sports if they feel like it, and would also silence speech that questions the transgender agenda. Sebastian implores his audience to take action and contact their members of Congress to speak out against this tyrannical, Orwellian bill. 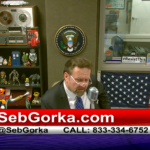 America First Highlight: The most dangerous Biden bill so far