For the entirety of the final hour of today’s show, Sebastian talks with investigative filmmaker Chris Rufo about the rise of the dangerous far-left idea of “critical race theory,” which is a racist, anti-White, and anti-American ideology. Chris talks about its rise as a result of the spread of Cultural Marxism over the last few decades, and how such ideas attempt to paint America as a racist, sexist, and inherently evil nation, while also teaching White people that they should hate themselves solely because of their skin color and ancestry. Chris highlights how this ideology works directly in tangent with cancel culture, as it seeks to silence anyone who dares to speak out against this dangerous and blatantly false ideology. 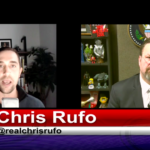 America First Highlight: The mob vs. you and Gina Carano