Sebastian is joined by Congressman Mo Brooks of Alabama’s 5th district, who has recently announced his campaign for the U.S. Senate seat in Alabama that is being vacated by retiring Senator Richard Shelby next year. Sebastian and Congressman Brooks talk about the most important issues for which he has fought over the course of his career, from the America First agenda to his being the first member of Congress to formally object to the fraudulent results of the 2020 election. Sebastian then offers his official endorsement of Mo Brooks for the Republican primary in the election. 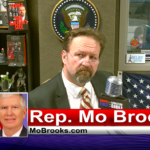 America First Highlight: The man I endorse for U.S. Senate