Sebastian is joined in-studio by Eric Greitens, the former Navy SEAL and former Governor of Missouri, who is now running to be the next Senator from the state of Missouri in the 2022 election. Eric talks about the Left’s efforts to remove him from office by hurling numerous unsubstantiated and vicious allegations at him, many of which were promoted by a George Soros-funded far-left prosecutor. Although he was ultimately exonerated and there are now investigations underway into the origins of the false accusations, Eric talks about how the ordeal nevertheless took a huge personal toll on him, and how he ultimately managed to overcome the challenges and rise to the occasion of running for the U.S. Senate. 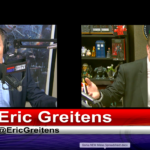 America First Highlight: The Left wants you to quit. Don’t.