For his weekly appearance, Victor Davis Hanson joins Sebastian to talk about his latest article at American Greatness, which details how the very fate of Western Civilization is at stake in the fight to save the 2020 election. Professor Hanson cites previous examples in modern American history, as recent as the 1960s, where regular American citizens stood up to fight back against radical rioters in the streets and became heroes, and how such modern heroes are exactly what we need today. 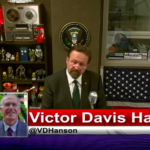