For the opening monologue, Sebastian reacts to a press conference with House GOP leadership, featuring House Minority Leader Kevin McCarthy and GOP Conference Chair Liz Cheney. At the conference, when Cheney is asked about President Donald Trump’s role in the GOP going forward, she arrogantly declares that he “should not have a role” in the future of the party and the country, with McCarthy awkwardly punting on the same issue. Sebastian points out that this situation is exactly indicative of the current state of the party leadership: They either outright oppose Trump and deny his popularity, or refuse to take a clear stand on the matter. This is further proof that there is no one better to lead this otherwise leaderless party than President Donald J. Trump. 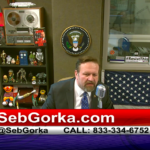