For a very somber opening monologue, Sebastian gives his thoughts on the historic Fall of Kabul just 24 hours earlier. Taliban forces, which had already overtaken much of the country’s territory in recent days, stormed the capital city and seized power after the president of Afghanistan fled the country. This has drawn comparisons to the Fall of Saigon, with thousands of Afghan civilians desperately trying to flee as the Taliban takes over, and also marks a massive failure for Joe Biden, who declared just a month earlier that it was “highly unlikely” that the Taliban would take over the country. Sebastian posits, however, that this situation is even worse than the end of the Vietnam War, as the Taliban now has access to a vast trove of American weapons, vehicles, and other resources left behind by the hasty evacuation; this will only create an even stronger breeding ground for future terrorist groups, which will now be better-equipped and better-funded than Al-Qaeda was prior to 9/11. 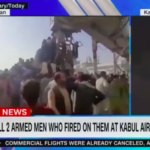