Sebastian talks to Ohio Congressman Jim Jordan about the rising backlash against Critical Race Theory, and whether or not parents, teachers, and students rising up against it could mark the turning of the tide against the Left. Congressman Jordan believes that the rise of CRT on the Left is indicative of the fact that the Democratic Party as a whole now fundamentally hates the United States of America, a position that is not politically sustainable and will quickly find the Democrats on defense as more Americans are woken up to their true nature. 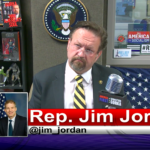