For the opening monologue, Sebastian once again takes on the Fake News media’s blatant double-standard in their coverage between the Atlanta shooting and the Boulder shooting; with the former, they rushed to turn it into an issue of “racism” because the perpetrator was a white man, whereas with the latter having a Muslim suspect, the media instead turned the focus to gun control and ignored the perpetrator’s identity. Sebastian also calls out the media for continuing to shamelessly exploit tragedy immediately after the victims have already died. 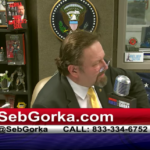 America First Highlight: The dead bodies are still in the morgue.