In today’s monologue, Sebastian goes over the list of five African-Americans who have been murdered in cold blood by rioters since the riots first broke out: Dave Patrick Underwood, David Dorn, Italia Marie Kelly, David McAtee, and Chris Beaty. Sebastian lambasts the sheer racial hypocrisy of the political, media, and Hollywood elite who continue to endlessly virtue-signal about “racism” and “white supremacy,” claiming that “Black Lives Matter” while ignoring these black lives that have been taken by black-on-black violence during the riots. Some, like Dave Underwood and David Dorn, served in law enforcement, while others such as Italia Kelly dared to speak out against the violence of the rioters. Yet there most likely will be no candlelight vigils, no wall-to-wall media coverage, and no celebrity outpourings for these people. 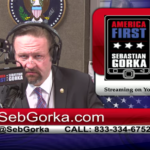