In this two-part interview, Sebastian is joined by the Hoover Institution’s Victor Davis Hanson to talk about the encroachment of Antifa and Black Lives Matter on American society, as most recently represented by the “Capitol Hill Autonomous Zone” in Seattle. Reacting to the extreme step of Antifa taking over six blocks of a major American city and attempting to impose their own government, Sebastian and Professor Hanson debate the best possible move in addressing such radical actions, as well as where the far-left will go next in their quest for power. 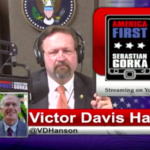 America First Highlight: Should we let the radicals take control?