Sebastian opens the show by reflecting on the Left’s latest absolutely absurd Cancel Culture crusade, targeting lovable and historic cartoon characters like the Looney Toons’ Pepe Le Pew and Speedy Gonzalez. This, on top of prior efforts to cancel Dr. Seuss, Gina Carano, and others is only further proof that the authoritarian Left is not slowing down their insane efforts and will continue canceling everything they deem “offensive” until nothing is left. To this same end, Big Tech and other left-wing forces have been censoring a viral hashtag campaign called “#BlueAnon,” which attempts to fight back against the Left’s QAnon smears of the Right and paint all of their insanity with the same broad brush that they use against conservatives. 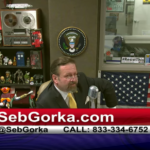