Sebastian talks to former New York City Police Commissioner Bernie Kerik about the blatant hypocrisy of those who pushed the “Russian collusion” story but conveniently ignore the Hunter Biden scandal. Bernie points out that men such as Roger Stone and Paul Manafort went through far, far worse for doing absolutely nothing wrong, while Hunter and the rest of the Biden family’s corruption is swept under the rug by the media, and never prosecuted by the Democrats and corrupt judges. Bernie says that if there is to be any justice in America, Hunter should face the same level of scrutiny as Roger Stone. 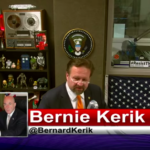