Sebastian opens the second hour with Professor Victor Davis Hanson, author of the upcoming book “The Dying Citizen.” They react to Joe Biden’s apparently unsuccessful summit meeting with Russian President Vladimir Putin in Geneva, which led to both sides declaring that they did not trust each other, nor did they feel that there was a friendly relationship between them. Professor Hanson points out the dangers of Biden’s foreign policy incompetence, namely in his efforts to enable Russia such as granting them permits to build a massive pipeline in Europe, as well as indirectly pushing Russia and China closer together in a potentially lethal alliance. 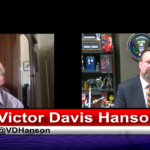