For the opening of the show, Sebastian talks to Bruce Castor, one of the new members of President Donald Trump’s legal team who will be defending him in the upcoming second impeachment trial. Castor gives a preview of the legal defense that will be used in the Senate trial, which will point out that the trial is blatantly unconstitutional due to the fact that President Trump is no longer in office, and as a private individual therefore cannot be impeached. 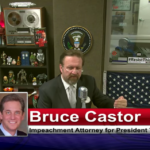