Sebastian talks to rising Republican superstar and Congressional nominee Sean Parnell, of Pennsylvania’s 17th congressional district. Sean talks about his time in the United States Army, including how he dropped out of college to enlist following the September 11th attacks, and how he was encouraged to run for the seat by President Donald Trump himself, which directly led to his primetime address at the 2020 Republican National Convention. 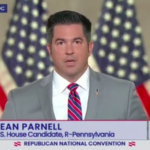