In this two-part interview with financier, historian, and columnist at American Greatness Lord Conrad Black, Sebastian discusses the current state of the 2020 election, and why the media’s hysterical projections that President Trump is as good as defeated are not even close to accurate. Lord Black explains the very difficult situation which President Trump currently faces, and how his best move is his current strategy of simply waiting for the right time to strike, rather than reacting too quickly or too impulsively. 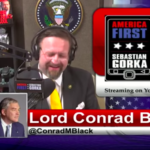 America First Highlight: President Trump is getting ready to strike.