Sebastian is joined by a brand-new guest, filmmaker Christopher Rufo, to talk about the importance of combatting the Left’s notion of “Critical Race Theory.” After Chris talks about some of his past projects that detail the toxicity of race-baiting and identity politics, he points out that this is why President Trump’s recent decision to ban the teaching of Critical Race Theory in the federal government was perhaps one of his most important moves yet. 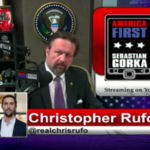