Sebastian reacts to the viral video of House Speaker Nancy Pelosi, who was caught on-camera getting her hair done at a salon that has been forced to stay closed in San Francisco, but allowed for her to make an appointment while regular citizens are forced to stay out. Sebastian points out that not only is this indicative of the innate hypocrisy of Pelosi and her fellow Democrats, as well as their disdain for the American people, but is also proof that she herself does not believe that the virus is nearly as deadly as they make it out to be. 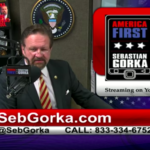 America First Highlight: Pelosi is immune to the coronavirus.