Sebastian opens the show with Congressman Mo Brooks of Alabama’s 5th district, to talk about the latest efforts to stop the steal in the 2020 election. Congressman Brooks talks about one of the lesser-known methods of challenging the legality of a disputed election via Congress, as allowed by the U.S. Constitution. Congressman Brooks has taken the first step of being the first member of the House of Representatives to formally dispute the results of the election, and now needs at least one member of the United States Senate to do the same. 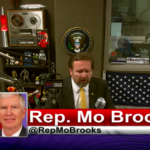 America First Highlight: One congressman who can stop the steal.