In this special interview, Sebastian is joined by President Trump’s son, Donald Trump Jr., to talk about the President’s powerful speech in the Rose Garden last night, and the significance of his walk through Lafayette Park to St. John’s Church. Don also talks about how the Democrats have fully exposed themselves with their public and unapologetic support for the riots, which has created an even greater contrast for the coming election in November: Freedom vs. anarchy. 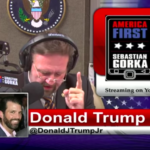