Sebastian is joined in-studio by Acting Commissioner of Customs and Border Protection Mark Morgan for two segments. Commissioner Morgan talks about the Trump Administration’s numerous incredible accomplishments in the fight to secure our border, including major drug busts, cracking down on human trafficking, and the milestone of nearly 400 miles of new border wall being built. Commissioner Morgan holds nothing back in describing the dire situation that existed on the border prior to President Trump taking office, likening the situation to an invasion, and emphasizing how important it is to secure our southern border, so that our nation may be safer than ever before. 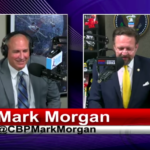