For the first guest of the day, Sebastian talks to Congressman Devin Nunes of California’s 22nd Congressional District, the brave man who uncovered numerous key details in the “Russian collusion” conspiracy theory. Congressman Nunes previews some of the upcoming votes on the House floor, including the absurd proposal to give statehood to Washington D.C., as well as a Republican resolution to censure Maxine Waters for her comments calling for violence in the streets if Derek Chauvin was found not guilty in the George Floyd case. Congressman Nunes then talks about some of the ridiculous rules that Speaker Nancy Pelosi has enforced on Congress by using the coronavirus as an excuse, including mask mandates. 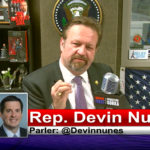