In the opening monologue, Sebastian continues discussing Nancy Pelosi’s “SalonGate” scandal, and her incredibly arrogant response by claiming that she was “set up” by the salon owner. In addition to pointing out the sheer hypocrisy and elitism of Pelosi’s willingness to destroy a small business owner just to protect her own reputation, Sebastian also notes that such a hypothetical “setup” pales in comparison to the actual criminal setup that General Michael Flynn went through at the hands of James Comey’s FBI. 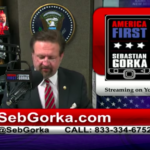