For his opening monologue, Sebastian holds nothing back as he tears into the Left’s explicitly racist language against White Americans. First listening to CNN’s April Ryan absurdly try to blame President Trump for inciting a “race war,” then a bizarre and obviously false story by Michelle Obama claiming that White people cut her in line in public places, Sebastian points out that such rhetoric is exactly what fuels vicious racist and far-left movements like Antifa and Black Lives Matter. 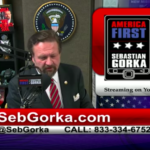 America First Highlight: Michelle Obama is a bigot and a liar.