Sebastian opens the show by playing several clips from Merrick Garland’s disastrous confirmation hearings before the United States Senate. Joe Biden’s nominee for Attorney General frequently stutters, often replies with “I don’t know,” and makes downright dangerous suggestions as to what he would do as AG, with regards to such crucial issues as immigration and “domestic terrorism.” Sebastian points out that this is only further proof of an incompetent elite rewarding their own based on connections rather than merit, and that the Left is now actively working to use the levers of power to punish their political opponents. 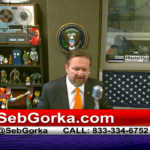