To discuss the latest on the southern border, Sebastian talks to former Acting ICE Director Tom Homan, who gives a passionate defense of Border Patrol agents and other immigration authorities who are still under attack from the Left. Tom swiftly debunks the Left’s latest crusade against Border Patrol, falsely claiming that agents on horseback were “whipping” illegal aliens when they were simply spinning the reins on their horses to prevent illegals from attacking them or their horses. Tom then takes direct aim at DHS Secretary Alejandro Mayorkas, who may be the most evil member of Biden’s Cabinet due to his heartlessness towards both American citizens and the suffering of migrants in third-world countries, as well as his blatant everyday lies about the crisis on the border. 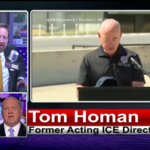