In his first radio interview since the Deep State first leaked unproven allegations against him, Congressman Matt Gaetz joins AMERICA First to respond to the outrageous claims that have been used to attempt to destroy him politically. After talking about how the allegations are part of an effort to blackmail him and his family, and promising that the culprits will be brought to justice eventually, Congressman Gaetz explains how this is evidence that the Left will never stop trying to destroy every single person on the Right who is even remotely effective. From President Trump, to Mayor Giuliani, to Congressman Gaetz, anyone who dares to challenge the Left’s narrative will be targeted, and it is incumbent upon us to fight back in any way we can. 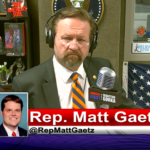