For this show’s opening monologue, Sebastian reacts to Lou Dobbs’ most recent show where he ripped a new one in the GOP for failing to adequately defend and support President Trump in the aftermath of the fraudulent 2020 election. Sebastian agrees wholeheartedly with Lou’s assertions that the Republican Party, on top of being spineless and unwilling to fight, is all too eager to “move on” from the Trump presidency and will abandon the Trump base at the first chance they get. And this is exactly why more pressure than ever before must be put on the entire party leadership to stand up and do what is right in supporting President Trump. 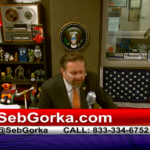