For the first guest of the day, Sebastian talks to Professor Victor Davis Hanson about how radical and how bold the Black Lives Matter movement really is. Fresh off the guilty verdict for Officer Derek Chauvin, and now with Black Lives Matter riled up over the police shooting of a knife-wielding teen in Columbus, Ohio, Sebastian and Professor Hanson talk about how the movement has led to some of the world’s most prominent celebrities, from NBA player LeBron James to talk show host Oprah Winfrey, feeling as if they are somehow “oppressed,” and thus think they are underdog revolutionaries. 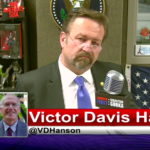