For the opening two segments of the second hour, Sebastian talks to Lord Conrad Black about the deluge of woke corporations declaring war on the state of Georgia over the state’s new voter integrity law. After reflecting on Lord Black’s latest article at American Greatness about the ruling class’s self-loathing and self-destructive nature, they talk about how such corporations have gone so far out of control to the point that they believe they have more power than the United States government. Sebastian remarks that if these businesses knew what was good for them, they’d shut up and do their job, whether it’s flying planes or serving soft drinks. 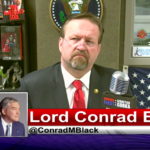