In this short clip from today’s show, Sebastian holds nothing back in his response to Mayor of Minneapolis Jacob Frey, who responds to President Trump’s promises to take swift action to quell the riots by calling the President “a coward.” Sebastian points out that if anyone is a coward, it is Frey for standing idly by and doing nothing while his city burns to the ground. And not only is Frey responsible, but all Democrats are guilty of stoking such racial tensions and being so complicit in mob violence whenever it suits their needs. 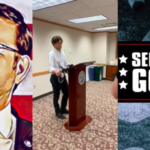