For an AMERICA First exclusive interview, Lieutenant General Michael Flynn joins Sebastian for his first national radio interview since the presidential pardon to discuss the final conclusion of the prolonged legal battle he has been put through for several years. After talking about how the pardon is not an admission of guilt – but rather, an exoneration – General Flynn reflects on what kept him going through such a dark period of his life, and why the Deep State had to target him so viciously. General Flynn also compares his struggle to the truly titanic battle that President Trump is currently waging against the same Deep State as they try to steal the 2020 election from him. 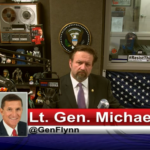