In this two-part in-person interview, Sebastian and Judicial Watch’s Chris Farrell discuss the latest on Attorney General William Barr and U.S. Attorney John Durham’s investigation into the origins of the “Russian collusion” hoax. Focusing on the latest developments that Durham apparently interviewed former CIA Director John Brennan for nearly 8 hours as part of the probe, Chris explains how some elements of the interview – such as it being conducted at the CIA, on Brennan’s home turf – is not a good sign that Brennan may face consequences, and talks about how important it is that Barr and Durham take the necessary steps to ensure that justice is done, rather than simply putting on a show. 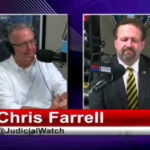