Sebastian opens the second hour with Congressman Matt Gaetz of Florida’s 1st district, to talk about the congressman’s recent vindication from outlandish charges of sexual misconduct. Florida businessman Stephen Alford recently pleaded guilty in a federal court to making up the false allegations of sexual assault against Congressman Gaetz, for the purpose of attempting to extort up to $25 million from the congressman and his family. Congressman Gaetz reflects on the ordeal of fighting to disprove these allegations, which the mainstream media rushed to report as “credible” when they first came out, and how that same media is now deliberately ignoring this crucial development revealing that the allegations were part of a scam all along.

You can watch Sebastian’s interview with Congressman Matt Gaetz here. 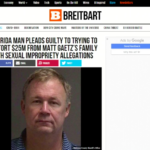