Sebastian opens the show with Congresswoman Marjorie Taylor Greene, who has just announced her intentions to introduce Articles of Impeachment against Joe Biden shortly after he takes office on January 20th. After Congresswoman Greene denounces the Democrats’ blatant politicization and abuse of the impeachment process, she explains her reasoning for impeaching Joe Biden, who, unlike Donald Trump, is actually likely guilty of crimes while he was in office. 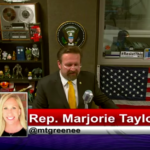