Sebastian is joined via Skype by Tatiana Ibrahim, the brave mother out of Carmel, New York, who went viral for her 11-minute speech against the corrupt school board that is pushing Critical Race Theory, anti-police rhetoric, and other far-left indoctrination on her children. Tatiana talks about several things that occurred at the meeting which were not filmed, including a school board member who openly intimidated a student in front of everyone when the student was about to speak out against Critical Race Theory. She also explains how she was especially disturbed by the teachings of anti-police lies due to the fact that her husband is a retired police officer as well, and why it is incumbent on all parents to resist such indoctrination efforts and teach their children the truth. 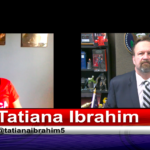